Why Expansion matters!
In 1998 the acceleration & expansion of the universe was measured/proved. However, Rafael Sorkin (1990) had previously predicted this using causets (see- Fay Dowker Theory of everything https://www.youtube.com/watch?v=VhHE86d-Th8 ). In brief, Causal Set Theory suggests that Space time is fundamentally discrete & granular (atomistic) rather than continuous (Zeno’s arrow). If causality is space-time’s most basic structure, then space-time events could be related by an (all be it partial) order/structure. This might explain why there is more than one type of infinity (Hilbert’s Hotel Paradox et al), and why ostensibly infinite systems contain symmetrical loops/patterns (see: modular-infinite-symmetry ). Musical frequencies and vibration rates are simply the best means we have of defining space-time. Rather than thinking of music as ascending or descending, (so called) higher pitches are literally “faster” than lower/slower ones, and visa versa. Similarly, as we are all (a) at the center of our own created/observed (heard) universe (as exemplified by the Doppler Effect) with specific direction being a matter of perception, and (b) all systems are subject to boundary conditions, it makes sense to define scalic fields (collections) from both ends (also from the center outwards)and indeed the following diagram reveals this.

Nb; The sensory world is limited by boundary conditions (related to distance or range), the imaginary world isn’t.

All Ascending +1,+2,+3… scales/modes
The descending (retrograde, inverted) modes are revealed within the following chart, i.e., by reading each unique pitch occurrence vertically (from the bottom up), each pitch occurrence of all the retrograde inverted scales is given by it’s (left aligned) mode definer (in bold).
E.g.; Eb7 is the retrograde inversion (Ri) of A0, C8 is the Ri of F#1, F7 is the Ri of C#5 etc… 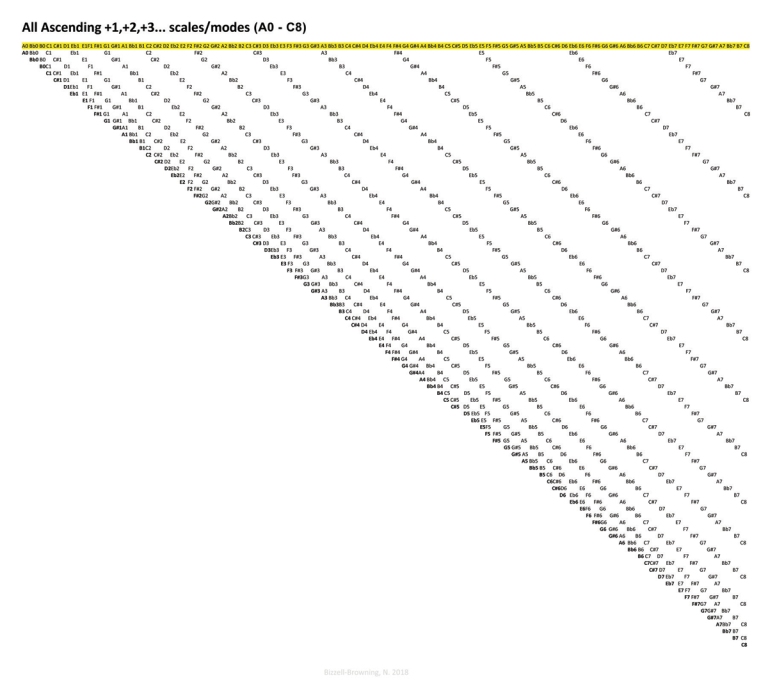